What is a marsupial? A marsupial is an animal belonging to the order Marsupiala, infraclass Metatheria. Members include the kangaroo, koala, Tasmanian devil and the Virginia opossum. Marsupials give birth to fetal-like young following a brief gestation period. The young then nurse for an extended period of time. It is generally accepted that a marsupial is a non-placental mammal whose female carries her young in a pouch, or marsupium, which provides the developing young with the proper environment, warmth, possess a placenta, although the placenta is non-invasive and functions in nutrient and waste transfer for a very short period of time, about 3 days in the Virginia opossum. 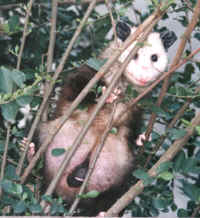 Female opossum with young in pouch

With out a long-lasting and functional placenta, the young must be born early in their development after a short gestation period. Marsupial young are basically embryos at birth. Once born, the young must climb with a swimming motion up the fur on the female’s adbomen and latch onto a teat. Not all female marsupials possess a well-developed pouch, as found on the abdomen of the Virginia opossum. Some marsupials carry young in rudimentary pouches which are basically skin folds. Many other do not have a pouch at all. The pouchless young must firmly attach to the teats with their mouths and front paws.

The reproductive system of the opossum has fascinated many and has led to interesting folklore. It was once believed that the male opossum mated through the female opossum’s nose. She then sneezed the young through her nose and into the pouch. Of course, this is not true. There are several reasons why this belief was held. One reason is that opossums are so small at birth it is difficult to witness the event. Observers had seen the female with an empty pouch one day. The next day she was seen with her nose in the pouch making sneezing sounds. Later, upon examination of the pouch, tiny embryos were found. Actually, the female opossum was either cleaning the pouch prior to the birth or licking the area to soothe her swollen teats. Another reason for this belief is the shape of the male opossum’s penis. It is bifurcated, like a 2 pronged fork. It was believed that the shape of the penis was a perfect fit for the female opossum’s nose. This isn’t true either. The female has an internal, bifurcated reproductive tract as well.

The breeding season for the Virginia opossum can begin as early as December and continue through October with most infants born between the months of February and June. A female opossum may have 1-3 litters per year. During the mating season, the male attracts the female by making clicking sounds with his mouth. 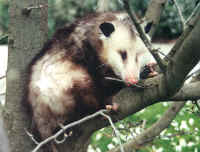 The female opossum is a spontaneous ovulator with an estrous cycle of about 28 days. She is in estrus a short period, about 36 hours. This is the time mating can occur. Sperm, which has become paired in the male opossum’s reproductive tract, will move through the lateral vaginal canals and become separate again in the female’s tract. If fertilization occurs, the fertilized eggs move from the oviducts to the uteri where they will gestate for a short period before being delivered through the medial vagina or central birth canal.

infant a few days old, next to dime for size comparison

11-13 days after mating over 20 infants may be born, although an average litter consists of 8-9 infants. The infants are so small at birth that 20 could fit into a teaspoon. Each of the hairless, embryonic-looking “pinkies” are no larger than the size of a bee or a dime and weigh approximately 0.13 grams. At birth, the infants must make a long and difficult journey from the birth canal into the pouch, latch onto a teat, and continue their development. The mother helps by licking the hair leading into the pouch, providing a moist path for the infants to follow. 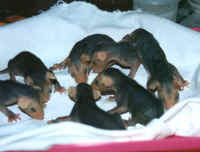 The teat swells in the infant’s mouth helping it to remain attached for about 2 months and providing a source of nutrition. On average, there are only 13 teats in the pouch and not all may be functional. If more infants are born than the number of functional teats available, the excess infants will not survive. Also, if only one individual attaches, milk production by the mother probably will not occur. 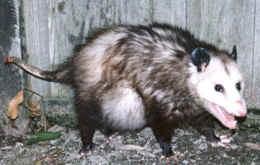 This opossum is not pregnant. She is carrying 9 infants in her pouch

The young remain in the pouch for about 2 1/2 months and at around 55-70 days the eyes open. As they become too large to fit in the pouch, they climb onto the mother’s back and are carried as she searches for food. At this time the young are learning survival skills such as finding food sources and predator avoidance. If one of the young becomes separated from its mother it will make sneezing sounds to call her. She, in turn, will make clicking sounds.

The young are weaned at approximately 3 months of age and are on their own at 4 1/2 – 5 months when they are approximately 7-9 inches long from nose to rump, excluding the tail. In a few months they will reproduce and continue the fascinating life cycle of the Virginia opossum.

Breeding season brings on two major consequences. First, males extending their range to search for mates are more subject to injury or death by cars, dogs and other predators. Second, females laden with young cannot run as fast and have to forage earlier in the evening and later in the morning. They risk exposing themselves to increased predation and more encounters with people, pets and cars with possible injurious or fatal consequences. Many times the mother does not survive these encounters and the young, usually found still alive in the pouch, ultimately wind up in the hands of wildlife rehabilitators.

It is important to always check the pouch of a deceased female for live young. If found then seek immediate medical assistance.

Index of All Pages